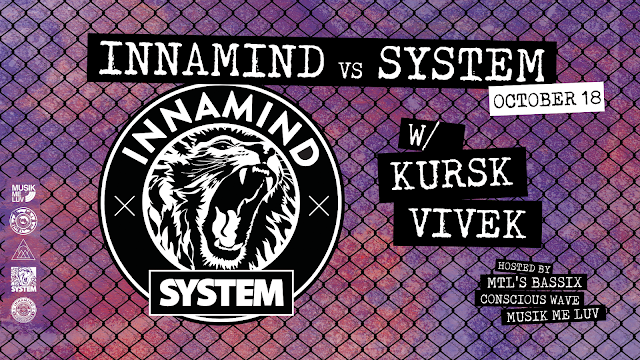 
Kursk (Kursky to his friends) is the owner of 2011 founded Innamind Recordings. A label dubbed as “one of the most forward-thinking labels representing the deeper side of the 140bpm spectrum.” Kursk and Innamind have helped give rise to some of the scenes more talented artists including Gantz, EVA808, Ago, Bengal Sound, LAS and Karma to name a few. Kursk has been DJing for over 10 years now and his upfront access to dubs is unmatched. Kursk pays homage to his hometown (Christchurch, NZ) crew and true inspiration Subtle Sound System. Having a deeply established crew and attending early Subtle Sound System gigs helped Kursk develop his passion for DJing. From collecting and playing records Kursk’s passion for owning and operating his own record label had begun. Kursk and Innamind are currently working alongside HVYWGHT London on a series of events, In 2018 Innamind was chosen to have a label showcase at Bass Coast Festival Canada. Innamind Recordings known for delivering stripped-back sounds built for maximum physical impact. Expect chest-pummeling sub frequencies, incisive percussive detailing and devastating freshness from a meticulously curated roster of talent


Whether it’s as an artist, label owner, deep-drawing world-touring selector or system-building soundman of London’s most important dances, V.I.V.E.K constantly drives to push things forward and contribute to the craft with serious attention to detail. A life-long student of soundsystem culture, he has total respect to the heritage, value and culture of true music and an ability to totally arrest your attention and imagination with his music since his emergence in the early 2000s.


Musically pressed and blessed on key imprints such as his own System Music, Deep Medi, Tectonic and iconic reggae imprint Greensleeves, V.I.V.E.K’s creations are a crucial brew of bass styles encompassing everything from heavyweight bass hypnosis to flighty, steppy garage hybrids via sweet dub soul and all-out low-end pressure. Meanwhile, his handbuilt soundsystem 'SYSTEM', is a unique force of nature in UK bass music culture. The most prominent modern system to be established this decade, it’s a whole new chapter in the UK’s longstanding and illustrious history of barrier-breaking soundystem communities. As such, it has become a school of culture, attracting selectors across the soundsystem music spectrum and fans from around the globe.
His label System Music has the same treasured and trusted status; not only as a source of legit never-to-be-repressed artefacts that prize the real value of music, but also as a platform that advocates forward-thinking system music from across the originating to freshmen continuum. Karma to Kromestar, Sleeper to SP:MC, LAS to Egoless: System Music’s celebration of bass music and nurturing of talent and craft ensures its consistent buy-on-sight ranking.


Most importantly it’s as a selector that V.I.V.E.K’s position is the most vital. A tailor of rich, immersive and eclectic sessions, few DJs dig as deep, join the dots or draw for dubs quite like this West London operator. Accentuating his influence as a producer, engineer, dubsmith, label curator and system builder; his creative excursions and candid ear prove his status as one of the most respected, influential and singular artists - Driven by nothing but craftsmanship, unity and the sense of culture and pushing UK bass music to constantly thrive and inspire.


this is a licensed event, no outside drinks will be permitted inside in the venue,